Cutting Through Time: A Brief History of Scissors 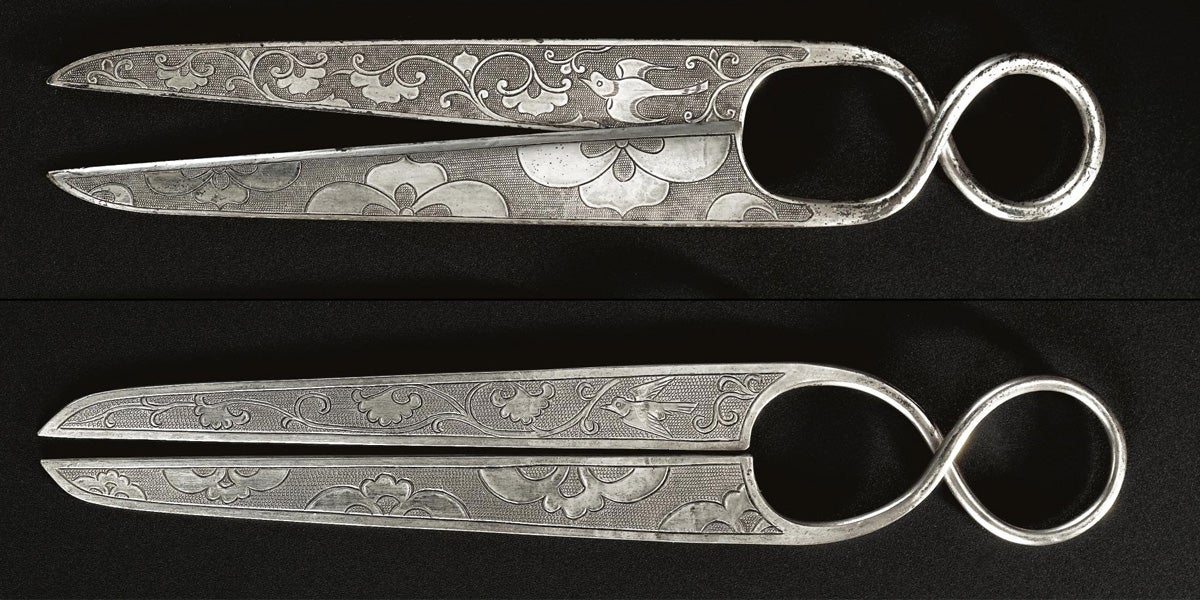 Found in nearly every home in America, and most around the world as well, one ingenious hand-operated tool has helped keep us clothed, fed, employed, entertained, well-groomed, and even assisted with lawn, agricultural and medical care for thousands of years. What one tool? Scissors!

While a persistent Internet myth credits Leonardo Da Vinci with the invention of this wonderful tool, scissors were in use well before Mr. Da Vinci's time. In fact, according to the New World Encyclopedia, spring scissors made of bronze were used in the Middle East more than 4000 years ago.

Spring scissors are two sharp blades of metal connected at one end that can be squeezed together to perform a cutting action. Once the squeezing action stops, the blades snap open again, due to the tension of the metal used to form them.

Created by heating and shaping a straight bar of metal, skilled metal workers were able to heat the center of the shaped bar of metal, bend it into a curve and then temper the metal to make if flex easily. The work required precision, even in those ancient times, to ensure the blades came together properly to enable a cutting action.

Spring scissors are still in demand today and chosen by many as a convenient tool to perform all types of fine cutting tasks. Hand sewers and crafters, as well as those who work in the garment industry like these tools, that are small, lightweight and nearly effortless to use.

Although they were not produced in large quantities until the 1700's, pivoted scissors are thought to have been used by the ancient Romans, perhaps as early as the year 100AD. Archeological records suggest that this fore bearer to the modern design was also used in China and the other countries of the Far East, around that same time period.

Pivoted scissors also required painstaking care to create. Hand-forging the metal and skillfully shaping it to form blades produced scissors capable of cutting cleanly and quickly. While today that process is done with precision machinery, it once took many hours of heating, hammering and working to produce a single pair. Even though the work of crafting fine scissors took hours of hard work, many of the ancient, highly collectible scissors found in museums and collections around the world today also bear fine decorative and sculpted features that would have taken even longer to create. Made of- bronze, silver, polished steel and even gold, the craft of scissor making was, and perhaps still is, a real art form.

In the hands of skilled crafts people, some scissors took on the shapes of delicate birds and animals, while others were decorated with delicate vines, flowers, or symbols. The actual size and shape of the scissors may have also been customized for the intended user, as some examples are extremely small and delicate, while others were clearly designed for larger hands to use.

The Impact of Sewing Scissors

Since the time when the first cave dwellers began to shape animal skins into clothing, the skill of sewing has enabled humans to protect themselves from the weather and exposure to harmful elements in their environment. In addition, it provided a way to maintain their privacy or adorn themselves for the purpose of ceremony or the attraction of a mate.

Clothing is not the only benefit that comes about from the process of using scissors to cut fabrics into pieces and then shaping them to fit a specific need. The quilts, bedding and mattresses on our beds, the upholstery in our home and cars, the drapes on our windows and even the hot air balloons marvel at would not be possible without sewing tools, such as scissors.

As the work that scissors could perform become known, more and more people wanted to be able to own them. This lead to mass production of pivoted scissors in 1761 by the English entrepreneur, Robert Hinchliffe, who manufactured quality scissors made of fine cast steel.

Today, fine scissor makers continue to use polished steel to create scissors capable of making clean cuts on the finest silks, as well as the heaviest leathers. Even as technology takes over many of the tasks in our lives, nearly every home still contains a pair, or more, of quality scissors for sewing, crafting, and general cutting needs.